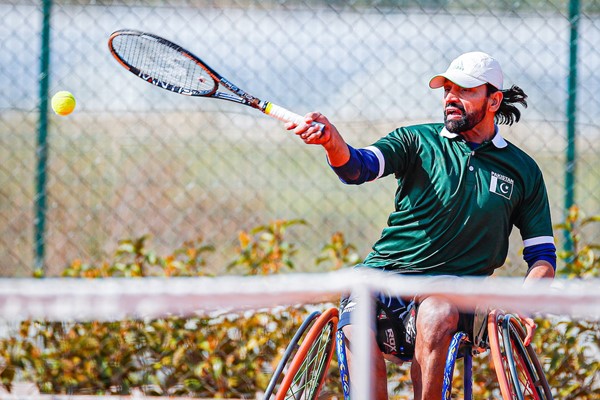 While the BNP Paribas World Team Cup may be over for another year, behind some of the main headlines – such as Japan’s first women’s title and South Africa’s quads becoming the first African team to reach a World Team Cup final – there are plenty of other stories of the ITF’s flagship wheelchair team event inspiring players from developing wheelchair tennis nations and helping make a difference to their lives.

“It was the first time for a Pakistan team to participate in such an event in 75 years of history of Pakistan,” says Asif Abbasi, the winner of one main draw singles title and two second draw singles titles on the UNIQLO Wheelchair Tennis Tour between 2017 and 2020.

“It was a great honour to be the first to represent Pakistan in the event. History was created when I became the first ever Pakistani to win three international wheelchair tennis tournaments so far, to achieve a world ranking of 82 and to be in the top 100 in the world in 2018. To be the part of the team who participated first time in World team Cup Qualification event was another great honour.”

Abbasi took up wheelchair tennis in April 2017 and lives and plays the majority of his tennis in Britain, where he’s won three UNIQLO Wheelchair Tennis Tour draws to date. But he is a proud Pakistani and, understandably, he and his teammates’ proudest moment in Antalya came when winning their round-robin tie against India 2-1.

“In the decider, we were not very strong but managed to win by giving our all and that resulted in a great victory. We came fourth (of seven nations) in our Asia group. That was our achievement. But apart from that we were honoured to meet the ITF wheelchair team and met old and new friends.

“My teammates Fida Hussain and Mohammad Irfan started their wheelchair tennis journeys in Pakistan about three years back. They are very hard working and dedicated players. That was the first time ever they had played and witnessed wheelchair tennis internationally. They learnt many things during this event,” adds Abbasi, who is currently the only player from Pakistan on the UNIQLO Wheelchair Tennis Rankings for men’s singles.

“As I am an LTA qualified Level 3 tennis coach and have international playing experience and training in wheelchair tennis coaching, I am glad that I could help them with the wheelchair movements and right technique and tactics to play matches during the qualification event,” the 45-year-old continues.

“I hope for their training and methods to improve in the future and hope that by having good coaching and playing more matches they will get better. I also hope we will find new players after this successful World Team Cup event.”

Aside from on-court rivalries and ambitions to achieve the best result possible for your country, the World Team Cup has a rich history of creating and nurturing life-long friendships among players. This was also evident in Antalya.

“The players from India are very nice, and really good players,” says Abbasi. “I had met them before the qualification event, and we have a great camaraderie. They are known by Manoj (Manojkanth Somasundaram, runner-up in the 2020 UNIQLO Spirit Award) and they are also great friends. There were nice gestures from both nations’ players during our World Team Cup qualifying fixture.”

The debut of Pakistan at the World Team Cup Qualification Event this year is, it is hoped, the start of much more to come.

We have great hopes for the future of Pakistan wheelchair tennis,” he adds. “After (the qualification event) many young disabled people contacted me on social media and asked me to help them to learn wheelchair tennis. I would love to train and share my knowledge with Pakistani players, so we can develop them to compete at the international level.

“But they also need sponsorships which help them to focus and devote their time to tennis. To achieve this, we need help from national and international organisations to fund the programmes so Pakistan can rise in wheelchair tennis.”

The Pakistan Tennis Federation is pleased to convey that PTF, with the assistance of ITF, organized 3 Coaching workshops in Azad Jammu & Kashmir (AJK).

The Coaching workshops were conducted by PTF’s National Coordinator JTI Program Mr. Hamid Niaz, with the aim of launching the JTI Program in AJK for the first time. This program targets 14&U players, with special emphasis on 10&U children, especially in schools. These workshops were held in Mirpur, Bhimber and Kotli and participants were introduced to the ITF Tennis Play & Stay Campaign. This was the first tennis activity held by the AJK Tennis Association after their induction into the PTF as a non-voting member.

Sixty-four people from all over AJK attended the 3 coaching workshops. These included players, coaches, officials, sports teachers and parents.

President PTF Mr. Salim Saifullah Khan and the PTF Management thanked the ITF for their assistance in organizing the workshops. He appreciated and lauded the efforts of PTF management in conducting the workshops in a highly professional manner. He also felicitated the AJK Tennis Association for their active participation in the workshops, despite the fact that they are new entrants into the fold of PTF. A total number of 5 matches were played. Matches started at 4-30 pm, to avoid the extreme weather conditions.

Mr. Faisal Khan, Corporate Director Sales & Marketing at Serena Hotels, and Mr. Hussain Odhwani, Senior Manager-Corporate Marketing and Communications at Serena Hotels graced the occasion as Chief Guest and Guest of Honour respectively and distributed prizes amongst the winners and finalists of the event.

It is pertinent to mention that the ITF Covid-19 SOPs are being observed and no spectators were allowed to witness the matches as per government policy. ·         JTI program (a specific program for APS schools was discussed)

·         The possibility of holding Army schools and colleges competition in PTF was discussed.

·         The holding of national ranking events by the armed forces

The gratitude of President PTF Mr. Salim Saifullah Khan was also conveyed to him for taking out time to visit the PTF Complex and his passion and efforts for the promotion of sports in Pakistan were also highly appreciated. The DG assured all possible assistance and cooperation to the PTF for the promotion and development of tennis in Pakistan, with special emphasis on player development and coach education. Pakistan Tennis Federation is pleased to inform that Col. Asif Zaman [R], DG-PSB visited PTF Complex Islamabad, to witness some of the matches and also as Chief Guest to distribute prizes amongst the winners and runners up of the 1st PTF Development Series Junior National Ranking Tennis tournament-2021.

The DG also interacted with the players and their parents and appreciated their participation and interest in these events.

He also endorsed his remarks in the visitors’ book and appreciated and lauded the efforts of the PTF management for their excellent achievements for promotion of tennis in Pakistan.

He assured all possible support and assistance to PTF for fulfilment of their objectives and vision.

The DG especially mentioned the passion, efforts and achievements of Mr Salim Saifullah Khan President-PTF, who will be long remembered not only for promotion of tennis, development of infrastructure but also for bringing international tennis back to Pakistan after a lapse of twelve years through his personal efforts and interaction with ITF senior leadership.